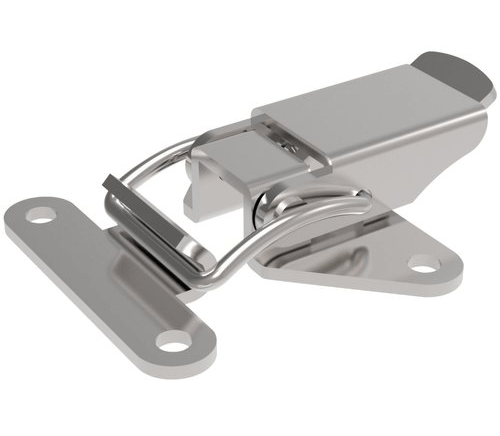 When you think of latches, you might picture old-fashioned barn doors or perhaps the hidden trap doors in old mystery novels. Today, however, they are used in a wide range of applications and products.

Toggle latches are one type of latch that is commonly used to hold objects closed. The additional advantage of toggle latching is that the locking mechanism springs back when the release lever is pressed.

Therefore, in this article, we will help you understand more about toggle latches and how to choose them for your project needs.

What is a toggle latch used for?

A toggle latch is a piece of mechanical device that is used for fastening or securing two objects. When you unlock the toggle latch, you will be able to separate the objects. So, you can use toggle latches in the following applications:

-Storing items in a garage.

How does a toggle latch work?

The head and tail are connected by a pivot pin. You will find two or three holes on each part. The holes on the head function as guides for locating the pin while the pin passes through both parts of the latch. When you pull on a toggle latch, it will unlock and move toward its resting position in order to release its grip on an object or surface.

What are the types of toggle latches?

Toggle latches come in various designs and shapes. Here are some of the common types of toggle latches.

These latches have a rectangular base that is attached to the object to be secured. The other part of the toggle latch is a sliding bar. It slides into holes at the top and bottom of the base, and when it is pushed downwards, it rests on top of the base to keep it in place. When you want to open the object, you use your finger or another tool to push up on this bar, which releases it from its resting position so that you can move it out of its hole and open the object.

This type has two parts that are connected by a spring when they are locked together. One part has tabs that rest inside corresponding slots on the other part; this keeps them locked together until you press on one tab with your finger or another tool to release it from its slot so that you can move them apart from one another. 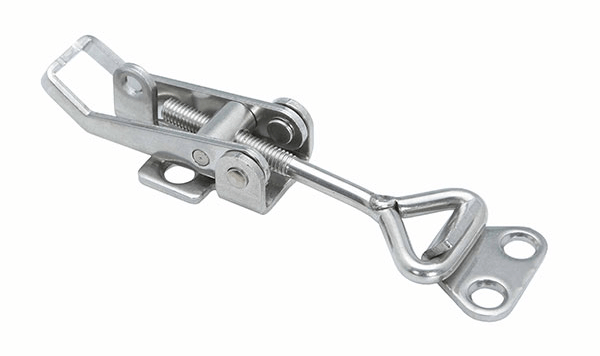 As the name suggests, you can easily adjust the positions of the fastening planes on these latches. They have threaded rods on both sides that you can slide up or down to adjust the length of the device.

This is a very popular type of toggle latch, particularly in Europe. It has a lever on one end that you pull upwards to release it from its resting position, and then you can move it aside to open the object you are securing.

Other than the above types, toggle latches are further classified based on their application areas or how they are built. Under this, we have;

These are commonly used in most household applications such as securing cabinets and boxes. They are cheap and cannot take immense forces or vibrations.

In terms of size, they are quite small and their materials have not been thoroughly reinforced for strength. They also require minimum user effort to lock and unlock.

This type of toggle latch is commonly used in heavy-duty, industrial applications. They can withstand high amounts of force, vibrations and other extreme conditions.

They are larger in size than the lightweight toggle latches, and they have more mechanical parts that help them withstand the forces and vibrations. The materials used for their construction are also more durable compared to the lightweight ones.

This class comprises of the strongest toggle latches. They can withstand high amounts of force, vibrations, and other extreme conditions. They are made of heavy-duty steel variants.

They are larger in size than the medium-weight toggle latches, and they have more mechanical parts that help them withstand the forces and vibrations. The materials used for their construction are also more durable compared to the medium-weight ones.

These toggle latches are used for larger panels and cabinets.

From these different types of toggle latch, you can tell where you fit in. You will eventually choose the right toggle latch for your specific application area.

Another key factor to consider when buying toggle latches is the material. As expected, the material will dictate the strength, durability and reliability of the toggle latch.

Different types of materials are used for making toggle latches including:

The biggest percentage of toggle latches in the market are made of stainless steel. This is because it is the most common material used for making toggle latches. Stainless steel toggle latches are very strong, durable, and reliable. They can withstand harsh conditions, high amounts of force, and vibrations. They are also resistant to corrosion, which is why they are widely used in the marine industry.

Brass is a softer metal than both aluminum and stainless steel so it can be easily dented or scratched by harder objects when handled roughly. Brass will oxidize faster than other metals in contact with water, salt air or oxygen over time, which makes it prone to corrosion if not well-maintained.

Die-cast toggle latches are made of a mixture of zinc and aluminum. The zinc gives it strength like aluminum and the aluminum gives it a lightweight like brass. Die-cast toggle latches are mostly used for applications where weight matters a lot but not as much as aluminum, or for applications where strength matters more than weight.

How can I tell the load value of a toggle latch?

What are the advantages of using toggle latches?

Toggle latches have a lot of advantages over other types of latches. Here are some examples:

Toggle latches can be installed very easily and quickly. They can be installed by hand or through a power drill or screwdriver. Toggles can also be easily removed, which makes them ideal for applications where it is important to take them out quickly and easily.

The design of toggle latches allows them to hold more weight than other types of latches, and therefore they are stronger as well. This is especially important for applications where weight matters the most.

Toggle locks are also easier to install than other types of locks because they do not require any special tools or skills to install them.

At Rocheindustry, we can have high-end technology that can design toggle latches for different applications. Simply contact us and we will get the job done.

Need Any Services? Contact Us Now!
Go to Top